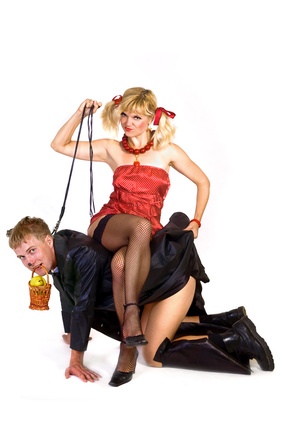 So you want to be a money mistress.

Become a Money and Slave Mistress

"It is not the strongest of the species that survives, nor the most intelligent, but the one most responsive to change." -- Charles Darwin

So you want to be a money mistress. It's not an easy job. You have to keep Darwin's quote in mind when dealing with your slaves, with security and with your personal finances. You will need to spend considerable time and creative resources to keeping your slaves happy – or miserable in the ways that makes them happy.

What is a Money Mistress?

Some slaves will have a blackmail fetish. Let the slave take the initiative in suggesting blackmail. Do not initiate threats which could be interpreted as blackmail or the slaves may get scared and go to the police. If they do send you compromising photos, personal information such as Social Security numbers, get rid of them but do not tell your slave you have done so.

There are many things you need to do before you can set up shop (so to speak.) Consider all of these things carefully before you start dominating your first slave:

Take your time in choosing a Mistress name. Your name is like a company brand. It's the first thing money slaves see. Brainstorm ideas for names by:

When you get a name, do a quick online check to see if someone else already has it. Once you get a name, then you can think about your persona's look, style and pet peeves. You don't necessarily have to have a whip, chair and stiletto heels. Some guys get turned on by the thought of a curvaceous, hot-blooded yet no-nonsense babe in a nun's habit. Now is the time to give your imagination free reign.

You need to hang out on fetish forums or read fetish magazines in order to get a hang of the lingo and a feel for proper slave-mistress etiquette. This can change rapidly depending on where you live, what new sex toys come on the market and even what memes pop up on social media that can be tweaked into the financial domination universe.

The main thing is to use words with confidence – even if you're not entirely sure what you're writing about. It's the attitude that counts more than the actual words, but the more lingo you know, the more the slave gets into the fantasy.

Get a Private Work Room

You need a special place such as a home office that can be where you work as a money mistress. This is a place where you won't be interrupted. Creating the fantasies and punishments for slaves takes some concentration and it's best to have a room with as few distractions as possible. If the room has windows, pull down the shades so you won't get distracted. Turn off the phone.

Other people who live in your home need to know that you are working and should not be disturbed unless it's an absolute emergency. It's difficult to keep a fantasy going with your slave when a family member is interrupting you every ten minutes for trivial matters. Your financial domination role may be a highly unusual business, but it's still a business and needs to be treated with respect.

You need a secure third-party online account. PayPal is the most popular. This account should be separate from your other financial products like checking accounts, savings accounts or IRAs. Even if you have a PayPal account, set up a separate PayPal account just for your slaves' tributes or "hush money."

Although some slaves may claim to prefer sending money by snail mail or other old-fashioned ways, don't let them. Punish the slave by ignoring him or sending him humiliating emails if he is like this. Using PayPal is a way to keep your personal information safe and protect your real identity.

Invest in the Best Computer Security Software You Can Afford

Any website having to do with sexual fetishes is a magnet for malware. That tasty picture you want to download could have a Trojan horse attached. Stay in control by purchasing the best computer security software package you can afford. Free anti-virus programs are just not enough. You need a firewall, a spam filter as well as anti-virus programs.

Be sure to regularly update your computer security software so it stays up to date on the latest types of malware discovered. Back up your all of your computer data regularly because really vindictive people like to send you malware that can destroy your hard drive and force you to get a new computer or laptop.

Creating Web Spaces for Your Persona

Although there are sites like fetish forums where you can meet potential slaves, it is best if you start your own website. In this way you have total control over what goes up on your site. You can also post on Twitter, Collar Me and Yahoo Groups devoted to fetishes and financial domination. Use hashtags like #domme #domination #cashpig on your Tweets in order to gain followers.

Be careful using images on your website. Do not put a photo up of yourself where your face is easily identifiable. Use suggestive images like a pretty foot going into a boot rather than intensely graphic images. Place a PayPal button on your site. Create a separate email for your slaves and only your slaves.

Keeping records will also let you know which slaves to keep and which to kick to the curb. If you are not getting financially compensated for the time and effort it takes to keep your stupid slaves groveling at your virtual feet, drop them. You need to focus on those that pay you the most. These are the slaves to spend emotional energy and personal time on as you get to know their quirks and kinks.

Getting to Know Your Slaves

Each slave has a breaking point. You cannot reach that point. The only way to discover a slave's breaking point is through trial and error. If you ever pet a cranky cat, you are already similar with how long you can pet that cat before she swipes you with her claws. If you lose a slave, laugh it off. It's the slave's loss for not sticking with you.

On the Internet, there are always more slaves. They are replaceable.